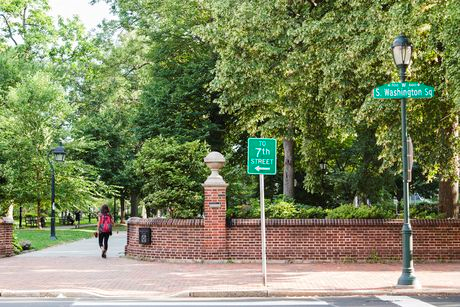 Washington Square West neighborhood is a lovely historic area of Philadelphia centered west of Washington Square, which was one of William Penn's original five city squares, laid out in 1682.

Beautiful residential architecture can be 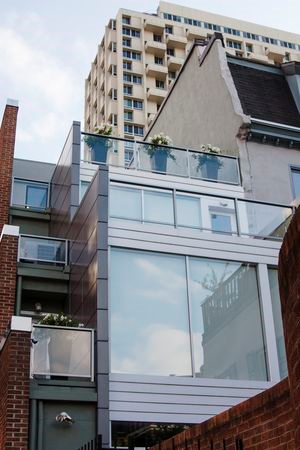 seen throughout Washington West in Greek revival homes. Washington West is also home to Philadelphia's Antique Row, on Pine Street between Broad and Ninth Streets. This small eclectic shopping district features vintage stores, handmade art and jewelry and, of course, antiques shops. Around the corner, you will find the nation's oldest hospital, Pennsylvania Hospital, now part of Penn Medicine, and a partner with Thomas Jefferson University in training students and providing the city with top notch medical care.

Throughout the neighborhood are narrow colonial streets that are perfect for pedestrians, but not so good for cars. One of the more interesting ones is the block of South Camac Street between Walnut and Locust Streets, which is made up of a collection of wooden squares.

Washington West has a charming historic residential neighborhood, with plenty of local cafes and restaurants to serve the local population and visitors who come to enjoy the park and see its many notable historic sites 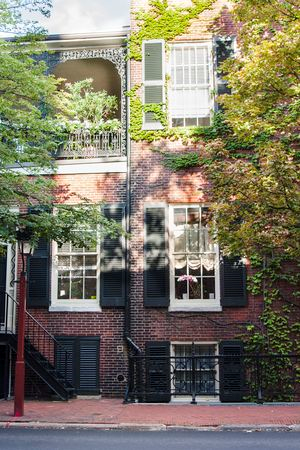 Washington Square west is a large area and includes a mix of condos and row-homes.The condos vary from high-rise buildings to low-rise buildings, one to three bedrooms, some with parking some without. Many of the low-rise condo buildings were converted from the mansions they originally were originally and made into condominium units. The row homes range from tiny trinities at 600 square feet up to luxury new construction over 5,000 square feet with parking and multiple roof decks.

Getting To Washington West

Just steps a block away from Washington Square West, Jefferson Station serves as a transportation hub for SEPTA’s regional rail lines with service from the suburbs and Philadelphia International Airport. The elevated train — known as the El to locals — makes stops at 8th, 11th and 13th Streets along Market, while various SEPTA buses traverse the numbered streets between 8th and Broad Streets and along Market and Chestnut Streets. The subway blue line runs along Broad and PATC, New Jersey’s train to and from Philadelphia, has stops along 8th and Market Streets and 12th/13th and Locust Streets.

Located between Chestnut and South Streets, between Seventh and Broad Streets,  bordering on the Independence Mall tourist area directly northeast, Market East to the northwest, Old City and Society Hill to the East, Bella Vista directly south, Hawthorne to the southwest, and mid-town Philadelphia and Rittenhouse Square to the west. 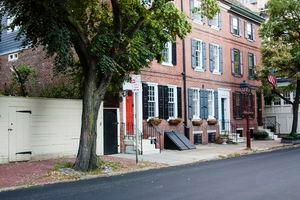 Luxurious hotels like the DoubleTree by Hilton and The Ritz-Carlton are close by on the Avenue of the Arts. For a more intimate stay, check out The Morris House Hotel or the Alexander Inn. There are also plenty of Airbnb listings, if you want to stay in the neighborhood. 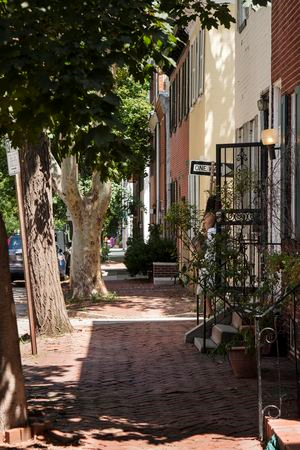 To be in Washington West is to be among some of the greatest dining experiences in the city. Talula’s Garden has an ingredient specific concept, where everything is fresh and local. They have a daily market, where customers can grab and go and still support healthy lifestyles. American cuisine at The Farm and the Fisherman, asian fusion at Cheu Noodle Bar, brunch at Tria Cafe, Caribbean creations at Mixto, and countless more...you want it, they got it!

Play old arcade games while enjoying cheap beer and awesome people at Dirty Frank’s, or hunker down with a big ol’ plate of sauerkraut and a pint of German ale at Brauhaus Schmitz. There are plenty of places for all kinds of occasions.

Throughout the neighborhood are narrow colonial streets that are perfect for pedestrians, but not so good for cars. One of the more interesting ones is the block of South Camac Street between Walnut and Locust Streets, which is made up of a collection of wooden squares.

Charming corner unit one bedroom loft condo in the heart of Washington Square West. The boutique condos in the Robert Quays building inhabit a lovingly cared for histor...

Welcome home to this fantastic condo in the beautiful Pre-War Lenox Condominium located in the heart of Washington Sq West, also known as Midtown Village and the Gayborho...

Lovely, leafy, location in Washington Square West - Coles House Condominium offers the best of both worlds - the space and grandeur of a historic townhouse with the conve...

Courtesy of BHHS Fox & Roach The Harper at Rittenhouse Square

Historically meticulous restoration on one of the most beautiful, tree-lined blocks in the city with historical character and gorgeous detail; 3 bedroom (could easily be ...

Courtesy of Sell Your Home Services