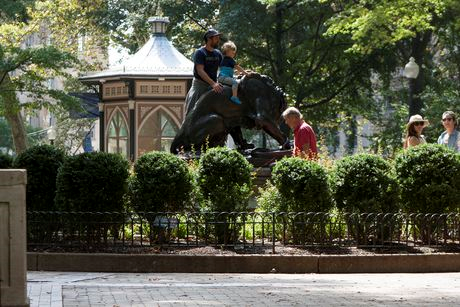 Though Rittenhouse is known for its trendy boutiques, luxury housing, and elegant restaurants, the park itself draws a diverse population of families, artists and locals alike. Farmers’ markets, art fairs, and a variety of events accentuate the city’s creative vibe and love of all things local.

It may be a tourist must-see but it certainly bears no resemblance to the pack-like, camera ready crowds one usually associates with visitors. Rittenhouse invokes a magic unlike any other part of the city. The bench-lined pathways and softly-lit lamps slow the hustle and bustle, allowing those within it to while away the hours sunbathing, picnicking, or conversing, while little ones explore the fountains and statues.

The Rittenhouse community is strong. The small businesses have relationships with the locals, understanding that they wish to maintain a way of life that promotes beauty and quality, and create environments that do so. They often contribute to galas and fundraisers that are held in the park. It is quite the opposite of what you expect to find in the middle of a city, making it not only a desirable place to live, but a true commitment to a way of life.

This area offers mostly condominiums, with very few row-homes or single family homes. The condos vary from high-rise buildings to low-rise buildings, one to three bedrooms, some with parking some without. Many of the low-rise condo buildings were converted from the mansions they originally were originally and made into condominium units. Single family homes in the Rittenhouse square neighborhood tend to be large stately mansions, elaborate and historically ornate. 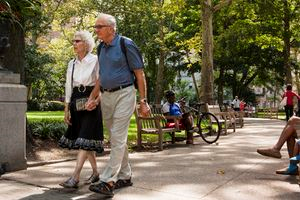 Rittenhouse is close to bus routes, SEPTA regional rail, and the Lombard-South stop on SEPTA’s subway line along Broad St. Many people bike and walk, making the area friendly to all modes of transportation.

Rittenhouse neighborhood lies relatively within the borders of Chestnut and Pine Streets and 18th and 22nd Streets.

The Rittenhouse Hotel lines Rittenhouse St. on one edge of the park, though visitors are not limited to this. There is also The Lantham within walking distance, and plenty of Airbnb listings for those who wish to stay close by.

Rittenhouse is extremely pedestrian and bike friendly.
Walkscore: 99
Bikescore: 94
Don’t have a bike?Don’t worry! There are Indego bike rental stations conveniently within the Rittenhouse area. 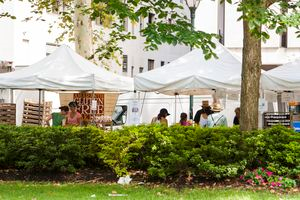 Rittenhouse and food go hand in hand, from the elegant outdoor seating at Parc to Barclay Prime, a distinctly unique fine dining experience along the Square. For a more casual encounter, cafes such as Metropolitan Bakery’s take the cake (pun intended). The lack of wifi and the beautiful community table in the center of the café contribute to Rittenhouse’s tight-knit personality.

Nightlife in Rittenhouse is much like its day life. Bars and pubs are a short travel eastward along Sansom, Chestnut and Walnut Streets, or Westward toward 20th street and beyond.

Want to let loose but stay nearby? Check out Graduate Hospital! 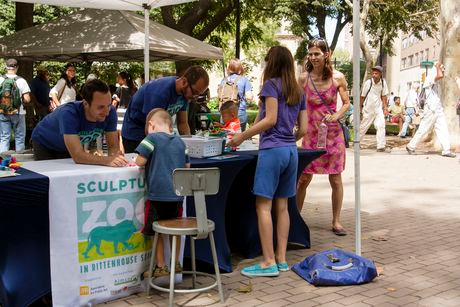 Rittenhouse is proud owner of many small boutiques, which tend to be appointment only or at least require a ring of a doorbell. Art is taken seriously, boasting numerous small galleries and art shows throughout the warmer months. Local businesses mix pleasantly with the well-known chains along Chestnut and Walnut Streets.

The park caters to events all year long, from art fairs and farm stands to the Spring Festival, which attracts more than 50,000 people one Saturday every May, and the Ball on the Square, the largest fundraising event each June for the Friends of Rittenhouse.

Newest Homes and Condos in Rittenhouse

Welcome to 1712 at The Warwick, a high floor 3 bed 3 full bath residence in Philadelphia's premier location. A split bedroom design with over 60 feet of SOUTHERN exposure...

Rarely available three bedroom plus library/study, three and a half bathroom penthouse at the highly coveted Parc Rittenhouse on the east side of Rittenhouse Square. Loca...